“The same customers who demanded that their applications be produced with gravure, today request the job to be done with flexo.” This is how Edmur Batista do Carmo, partner-owner of Finepack, defines the current state of the flexographic printing industry in Brazil.

Headquartered in a 13,000 m2 facility in the city of Itupeva near São Paulo, Finepack is known across the South American continent, and offers state-of-art technology to serve customers from all over the country in the food, beauty, cosmetic, pharmaceutical and pet food printing segments.

After its inception in 1992, the company was configured as a flexographic print service provider, at a time when flexo was in its infancy. “It was a period in which the quality benchmark was gravure. Flexo as we know it today did not exist.. To give you an idea, when Finepack was created, our desire was to offer a differentiated and high-quality service in flexography. However, the Brazilian market did not have many resources; there were no local mechanical anilox or cushioned stick back tapes suppliers, for example. There were also no computer graphics to consider; everything was done in photolith and photo-repeaters. We have a very different scenario today,” he remembers. 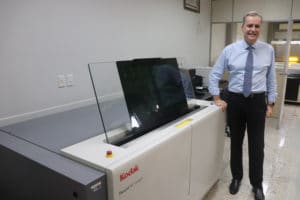 In 1996, faced with difficulty to find suppliers of photopolymer plates for its operations, Finepack expanded its service offering and established its own trade shop, Finetech. “While the main objective was to support Finepack, we also started selling photopolymer plates to other printers,” says Edmur. “Having our own prepress arm allowed us to quickly adapt and evolve technically with our prints jobs.”

With Finepack’s fast growth in the flexo printing market, they had to invest in new technology to stay at the forefront. These investments included installing one of the first 8-color presses in Brazil in 1998 – a Windmöller & Hölscher – which is still the company’s preferred printing platform today, as well as pioneering the Scitex CTP System (later acquired by Kodak) for laser engraving of photopolymer plates in 1999.

From 2004 to 2010, Finepack made significant changes to the business. They moved to the current building, in the countryside of the state of São Paulo, an area built to accommodate the company’s future growth and the technological evolution. In 2010, the company changed its focus from being a print service provider to producing and marketing its own products, while customers still had the choice of whether they wanted jobs printed with flexo or gravure. “Even then, the industry perception was that gravure delivered the best quality,” says Edmur.

That perception of flexo started to change in 2013 when Finepack made its first investment in KODAK FLEXCEL NX Technology by installing a FLEXCEL NX Mid System. “Since 2010, flexo has followed a technologically evolutionary path, and the FLEXCEL NX plate, now produced by Miraclon, has been an essential part of this process,” says Edmur.

“Today, in terms of quality, flexography is completely capable of producing the same level of quality print as gravure. It also brings additional advantages like faster set-up times, lower cost, and the ability to work with narrow-web. SKUs have multiplied, making flexo a much more viable process. We choose to produce jobs with run lengths between 30,000 meters and 100,000 meters on flexo, every time.”

And the market paradigm? “It has changed, without a doubt. The same customers who used to demand jobs be produced rotogravure, now ask for flexography,” he says.

The FLEXCEL NX System has opened new application opportunities for Finepack. One of them is the advantage of ECG printing to replace the CMYK + Pantone standard, now allowing the use of seven colors as a fixed pallet – even for spot colors.

“With Miraclon technology, we can produce jobs with ECG and remove the need to work with Pantone colors. This makes the process less costly, we avoid having to stock several special Pantones, and it reduces the need to clean between print jobs since the ink change decreases,” emphasizes Edmur.

Another benefit Edmund credits to Miraclon is NX Advantage technology, which enables the company to produce prints of 60 lines per centimeter when they were only able to print at 48 lines per cm before. “NX Advantage enables plate surface patterning that is optimized for ink laydown and ink transfer, which lets us increase the lineage without creating problems with the printing process. While we were able to image 60 lines per centimeter with other plates, there was a loss of quality on press. The is not the case with FLEXCEL NX Technology.”

“Although the whole flexo plate industry has evolved considerably, we especially see interesting aspects with FLEXCEL NX Technology, thanks to NX Advantage. With FLEXCEL NX plates, we obtain repeatability and high quality in the minimum areas without the print defects we see with other plates. And the best part,” Edmur concludes, “is that we can now produce a flexographic job with the same quality as gravure – you cannot tell the difference!”